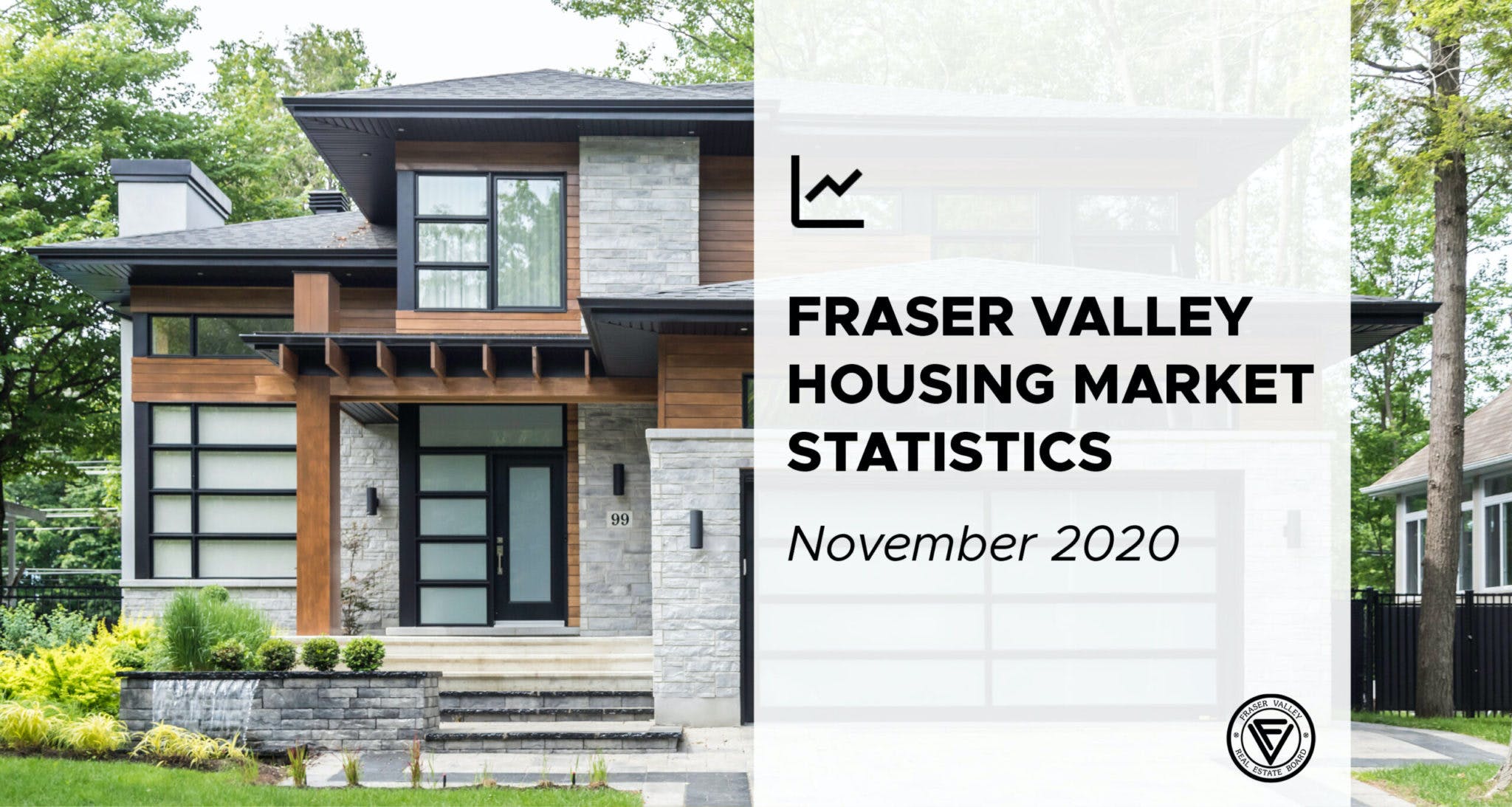 SURREY, BC – For the fifth consecutive month, demand for real estate in the Fraser Valley showed no signs of waning. Overall property sales for the month of November again set a new Board record. Sales records were also broken in September and October; and since July, all activity including new listings, has continued to be inordinately high.

The Fraser Valley Real Estate Board processed 2,173 sales of all property types on its Multiple Listing Service® (MLS®) in November, an increase of 54.7 per cent compared to the 1,405 sales in November of last year, and an 8.3 per cent decrease month-over-month compared to the 2,370 sales in October.

Chris Shields, President of the Board, observes, “We’re running out of superlatives. We expected November activity to moderate due to the season, but the desire for family-sized homes and their benefits continues to dominate. Since the summer, we’ve seen the strongest demand in our Board’s 99-year history specifically for single-family detached and townhomes.” 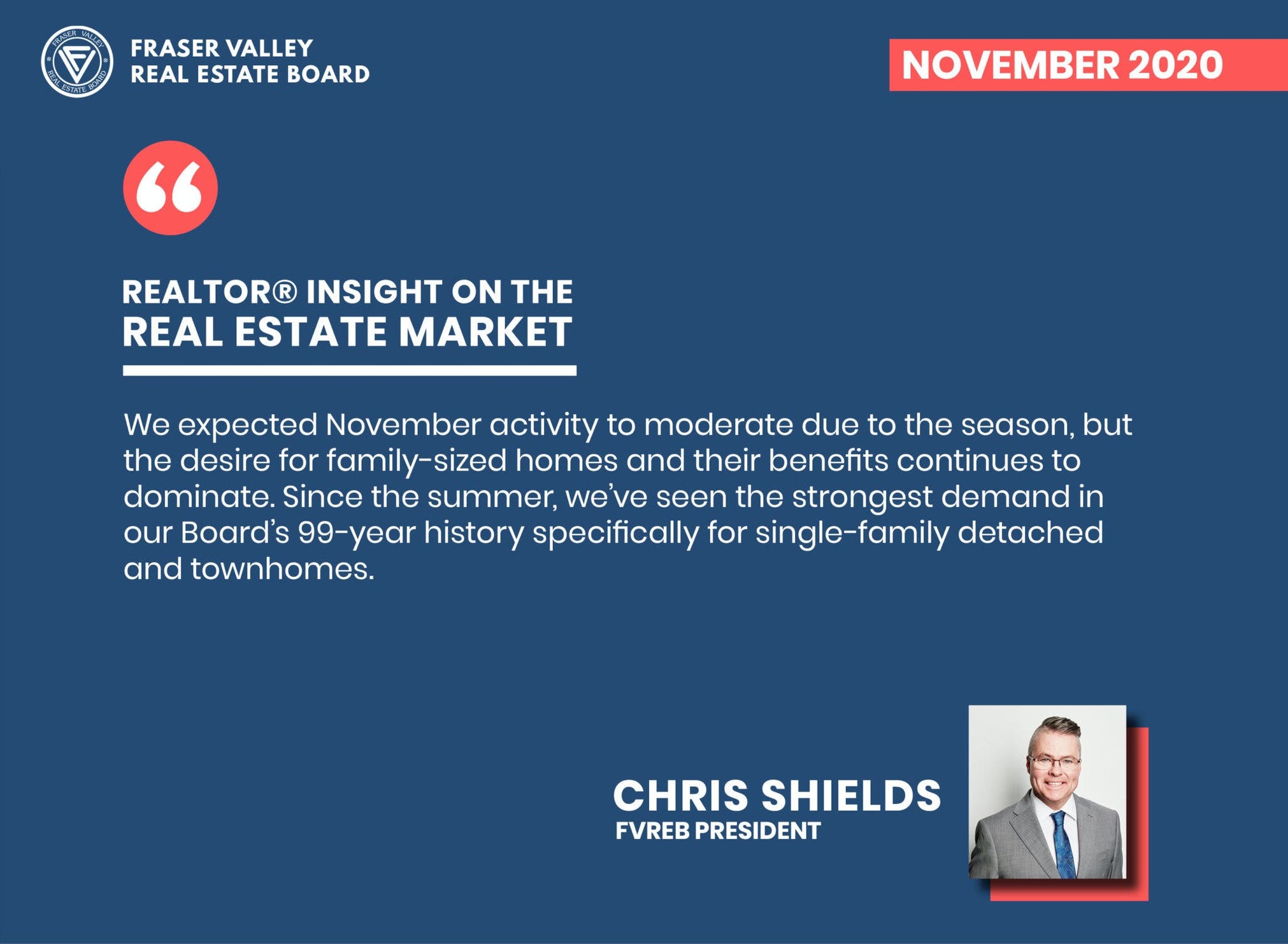 “For example, in Cloverdale, demand for detached homes exceeded supply; and in four of our communities the sales-to-actives ratio for townhomes was 50 per cent or more. Meaning, for every 100 active listings, 50 were selling.” 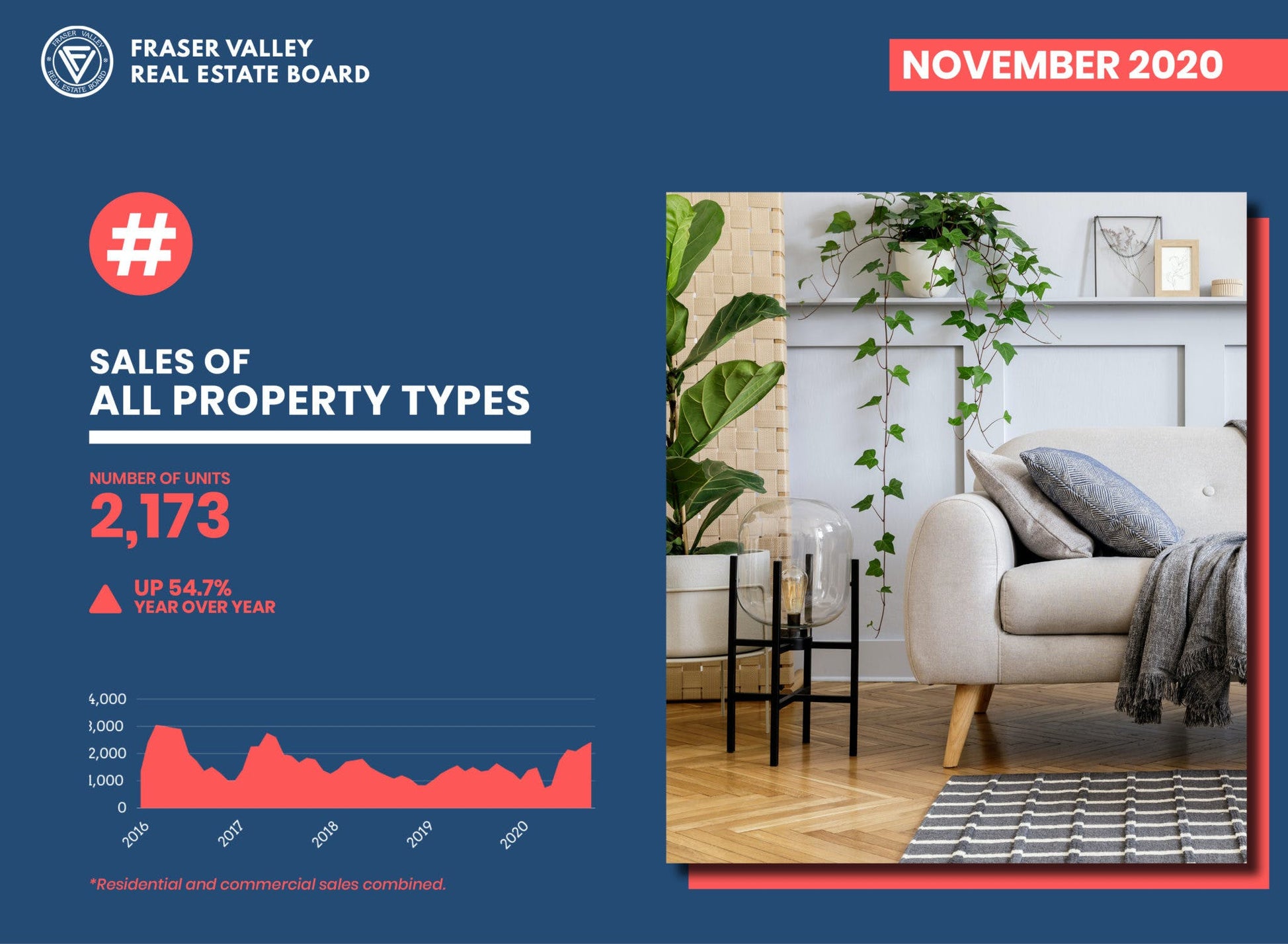 November finished with 5,847 active listings, a decrease of 14.9 per cent compared to October and a decrease of 13.2 per cent year-over-year. November’s total inventory was the fourth lowest for the month in the last decade. 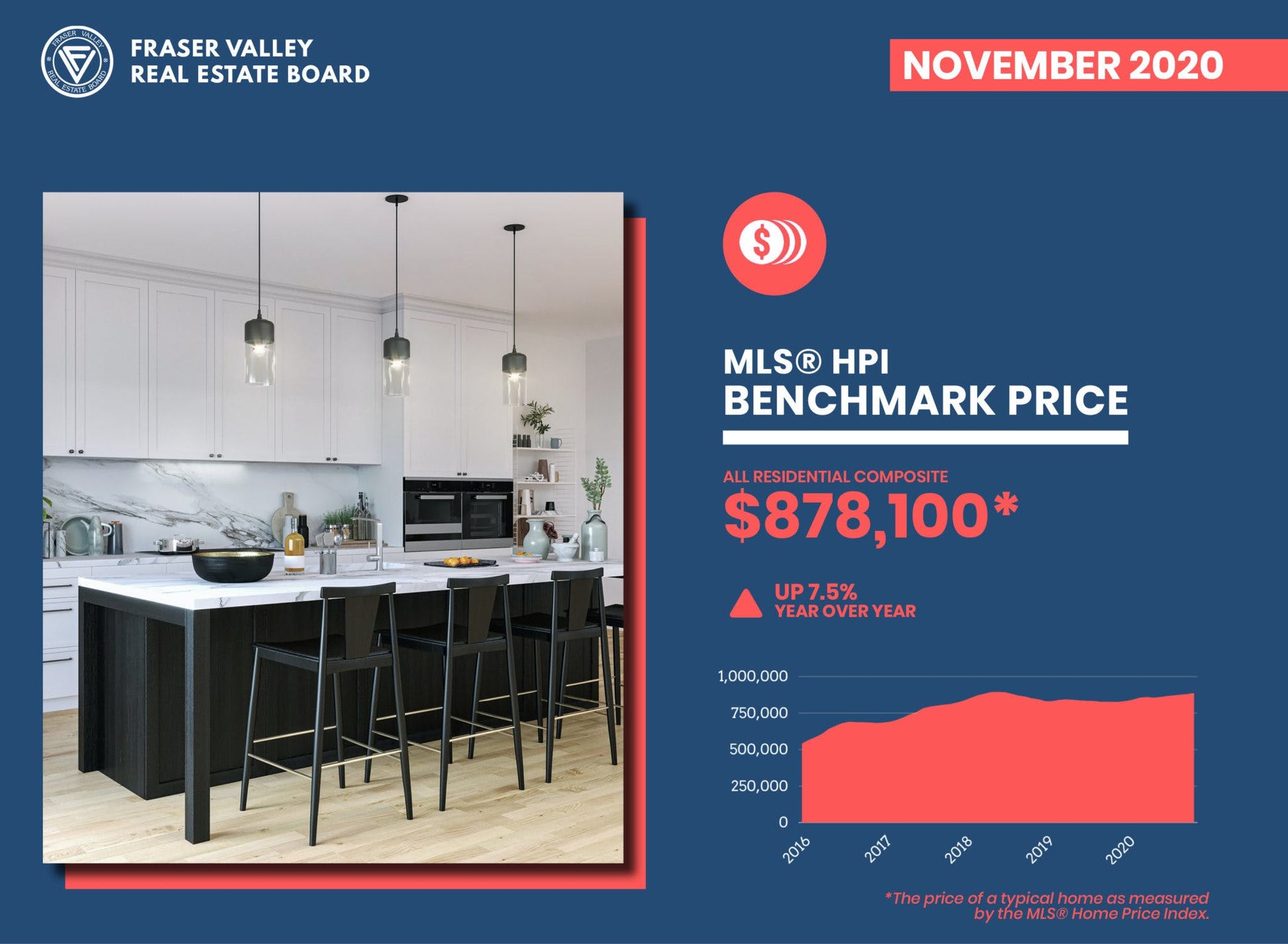 Baldev Gill, Chief Executive Officer of the Board, adds, “It’s impressive how consumers – in very high numbers, the highest ever – have adapted to the shifting realities and appreciate our industry’s adherence to strict safety measures. REALTORS® are working very hard currently serving their buyers and sellers using technology and innovation and the numbers clearly show that it’s working.” 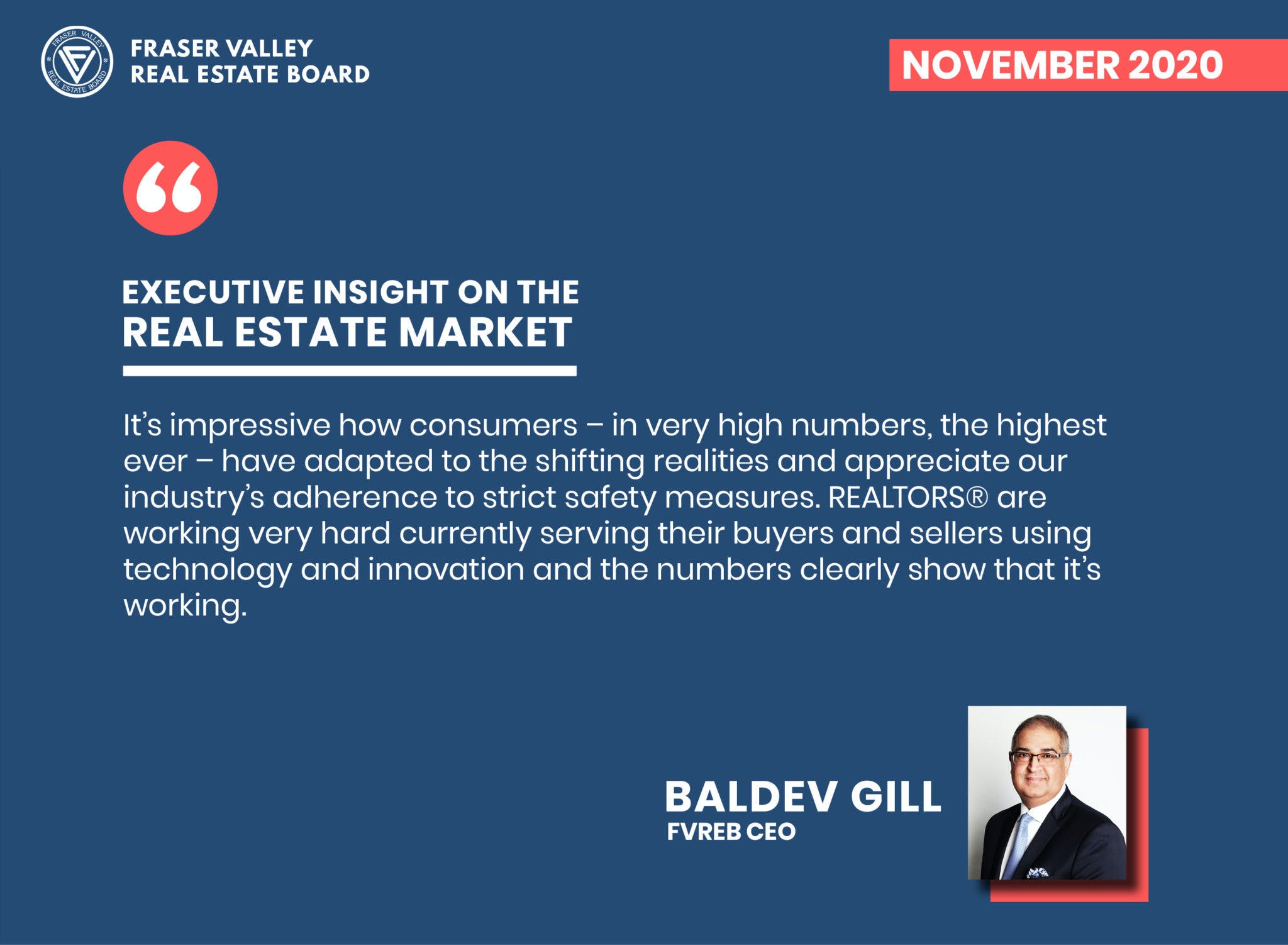 For the Fraser Valley region, the average number of days to sell an apartment in October was 34 days, and 25 days for townhomes. Single-family detached homes remained on market for an average of 32 days before selling.