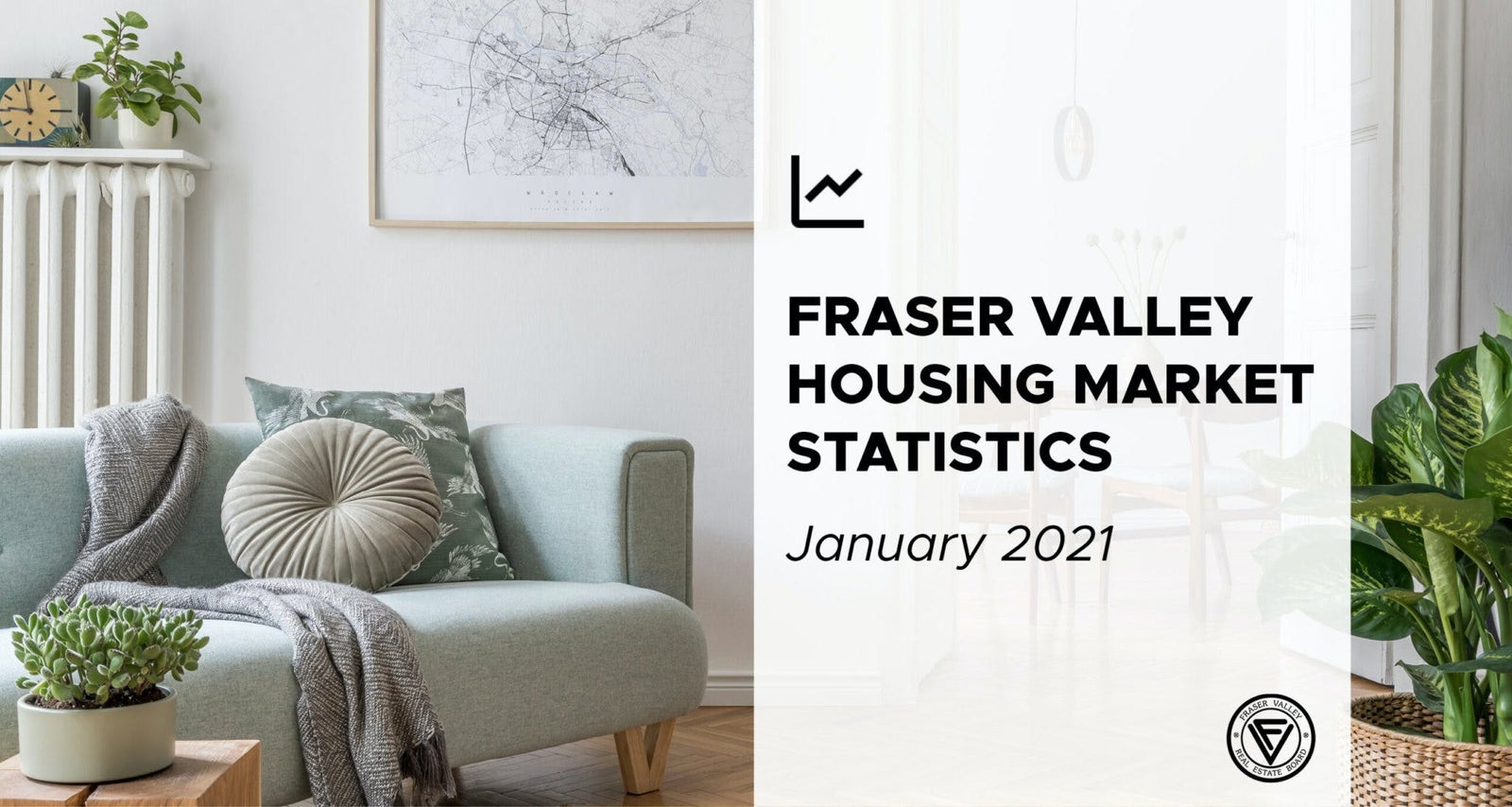 SURREY, BC – In a month that is usually one of the quietest in real estate, Fraser Valley’s market continued at a breakneck pace, producing the strongest January sales on record as well as a modest uptick in new listings.

The Fraser Valley Real Estate Board processed a total of 1,718 sales of all property types on its Multiple Listing Service® (MLS®) in January 2021, an increase of 76 per cent compared to January 2020 and 18 per cent fewer then were processed in December 2020. Sales in January set a new, record high for the month; 72 per cent above the 10-year average, and 28 per cent higher than the previous record of 1,338 sales set in January 2016.

“Buyers are very motivated right now,” said Chris Shields, President of the Board, “Lending rates are the lowest they’ve ever been, your housing dollar goes further in the Fraser Valley and we’ve seen a societal shift in the last year in how people value their homes. People are asking us to find them more space. 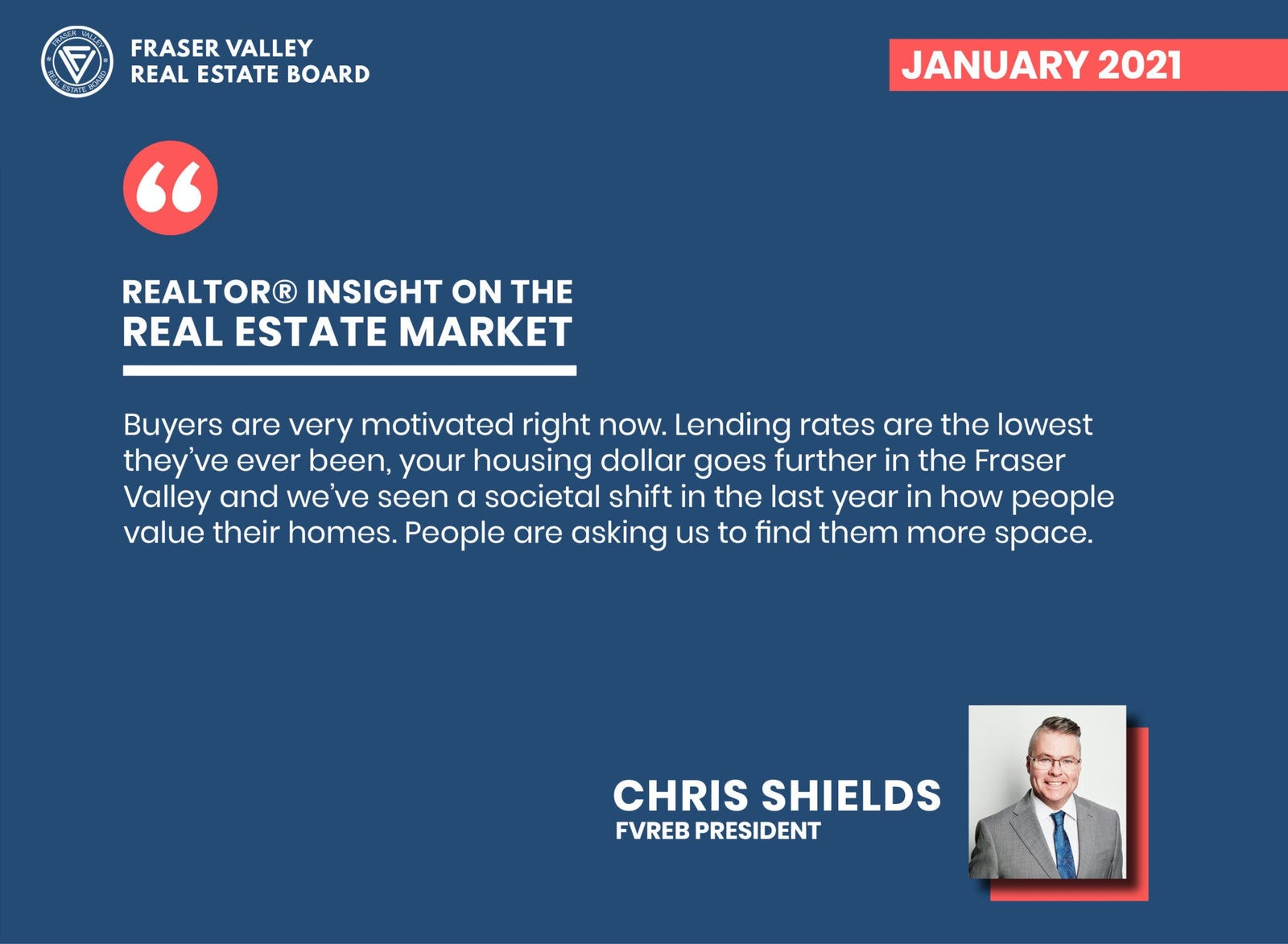 “I am working with a young couple who want and are able to move up – from a condo to a townhome – due to interest rates and the equity they’ve gained over the last couple of years. The challenge is supply. It improved slightly in January, but we’ve got a long way to go to replenish our housing stock. It remains a seller’s market.” 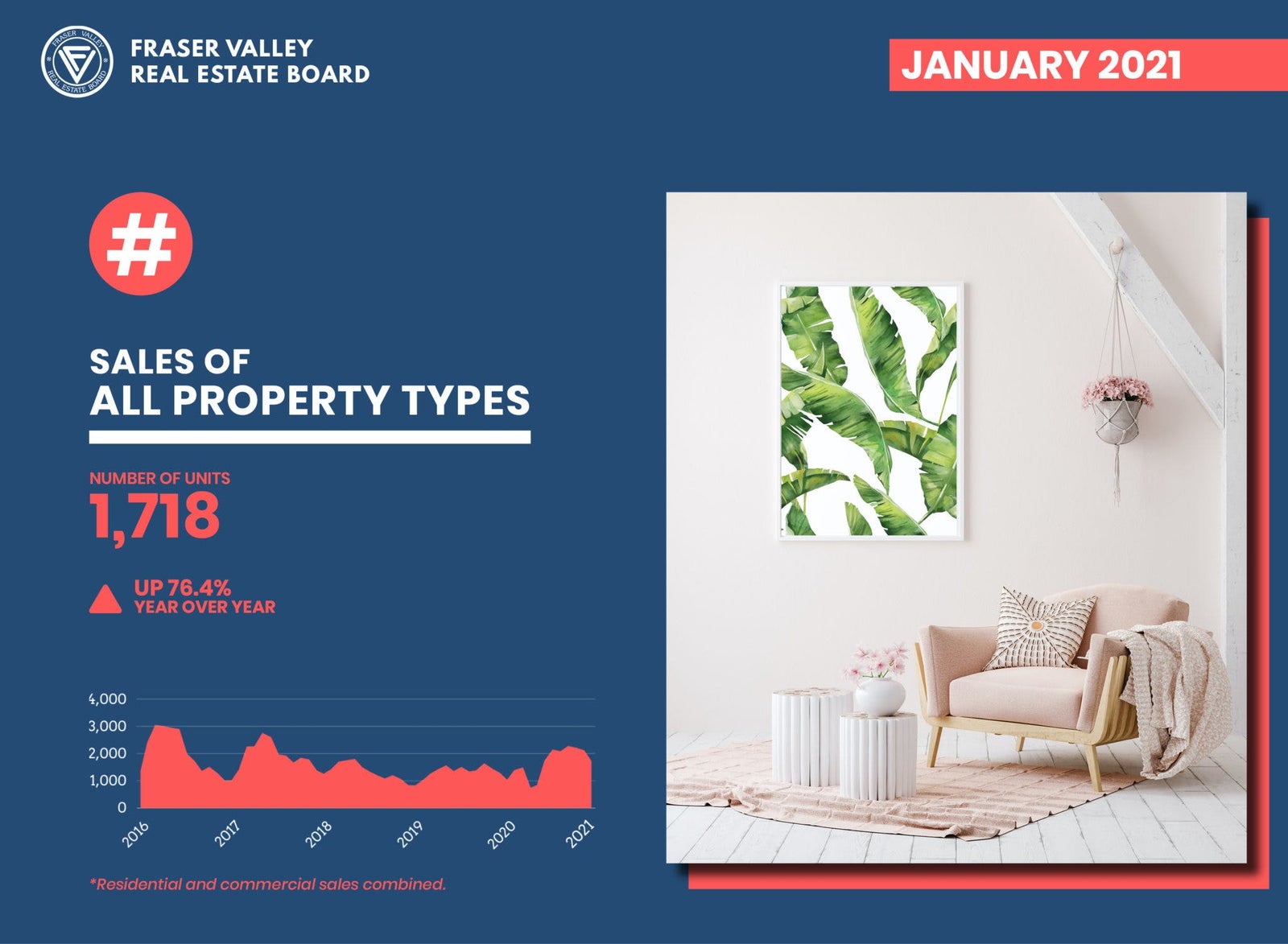 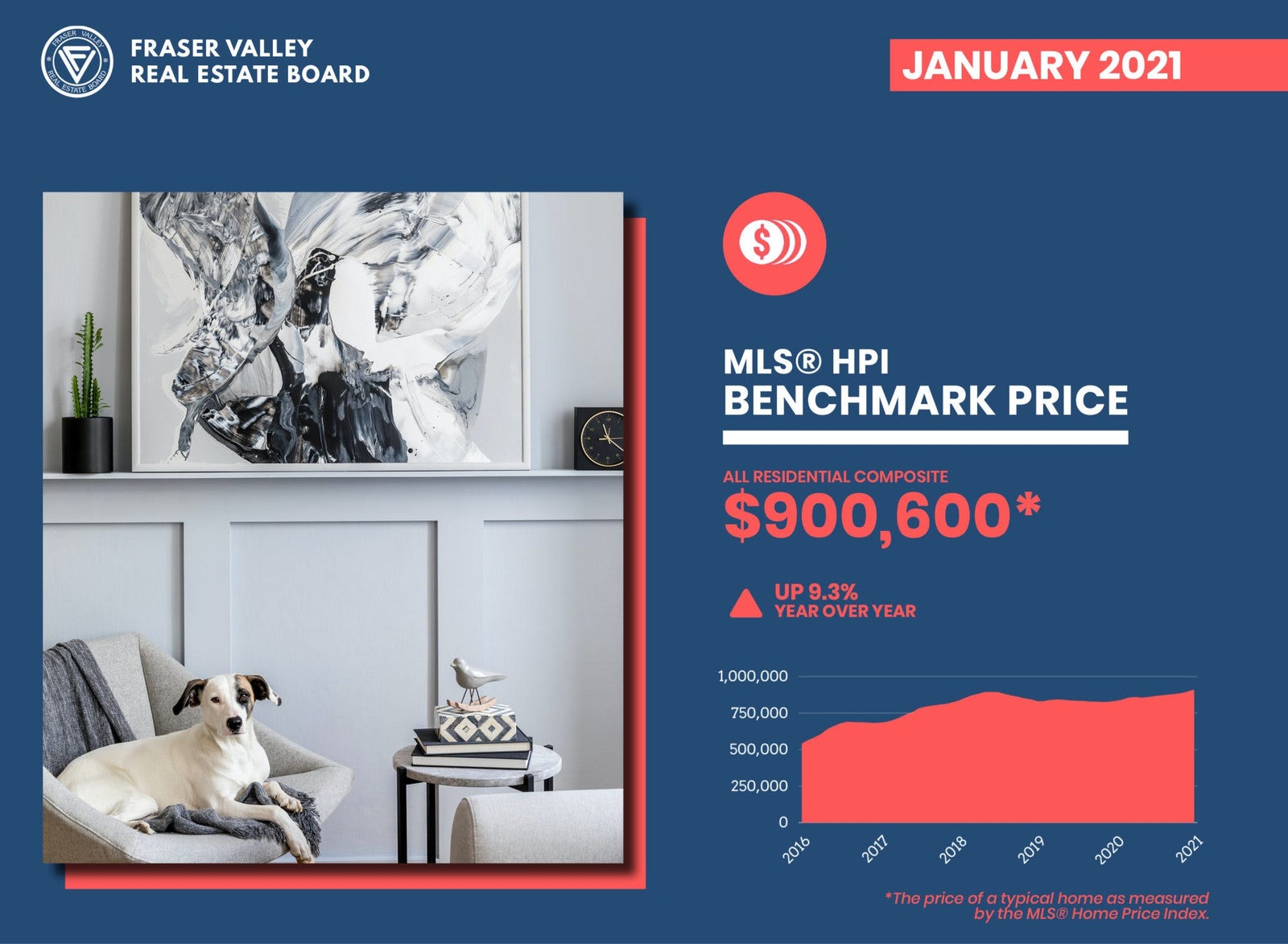 Baldev Gill, Chief Executive Officer of the Board, added, “Homeowners may be reluctant to sell because of concerns about buying and selling safety protocols; or the challenge of finding a new home to buy. The industry has worked hard to make it as easy as possible for you to thoroughly evaluate homes online first and then, for serious, final consideration, strict regulations are in place for in-person viewing.”
“And note, we’re already seeing an improvement in supply levels compared to December, a trend we anticipate that will continue as spring approaches bringing what is typically one of the busiest markets of the year.” 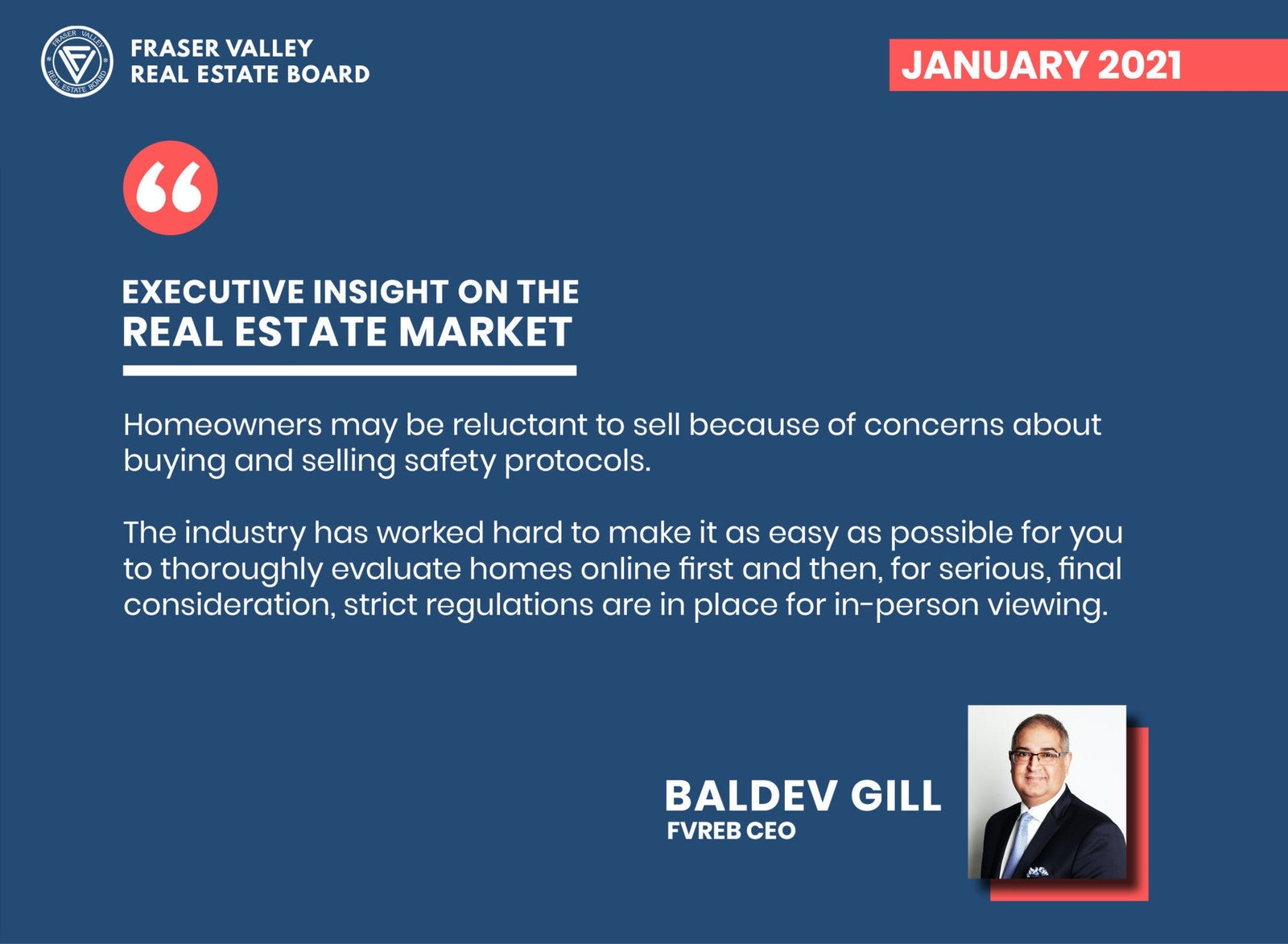 In January 2021, the average number of days to sell a single-family detached home in the Fraser Valley was 35, compared to 60 days in January 2020; 28 days on average to sell a townhome and 37 days for apartments, compared to 47 and 49 days respectively, in January of last year. 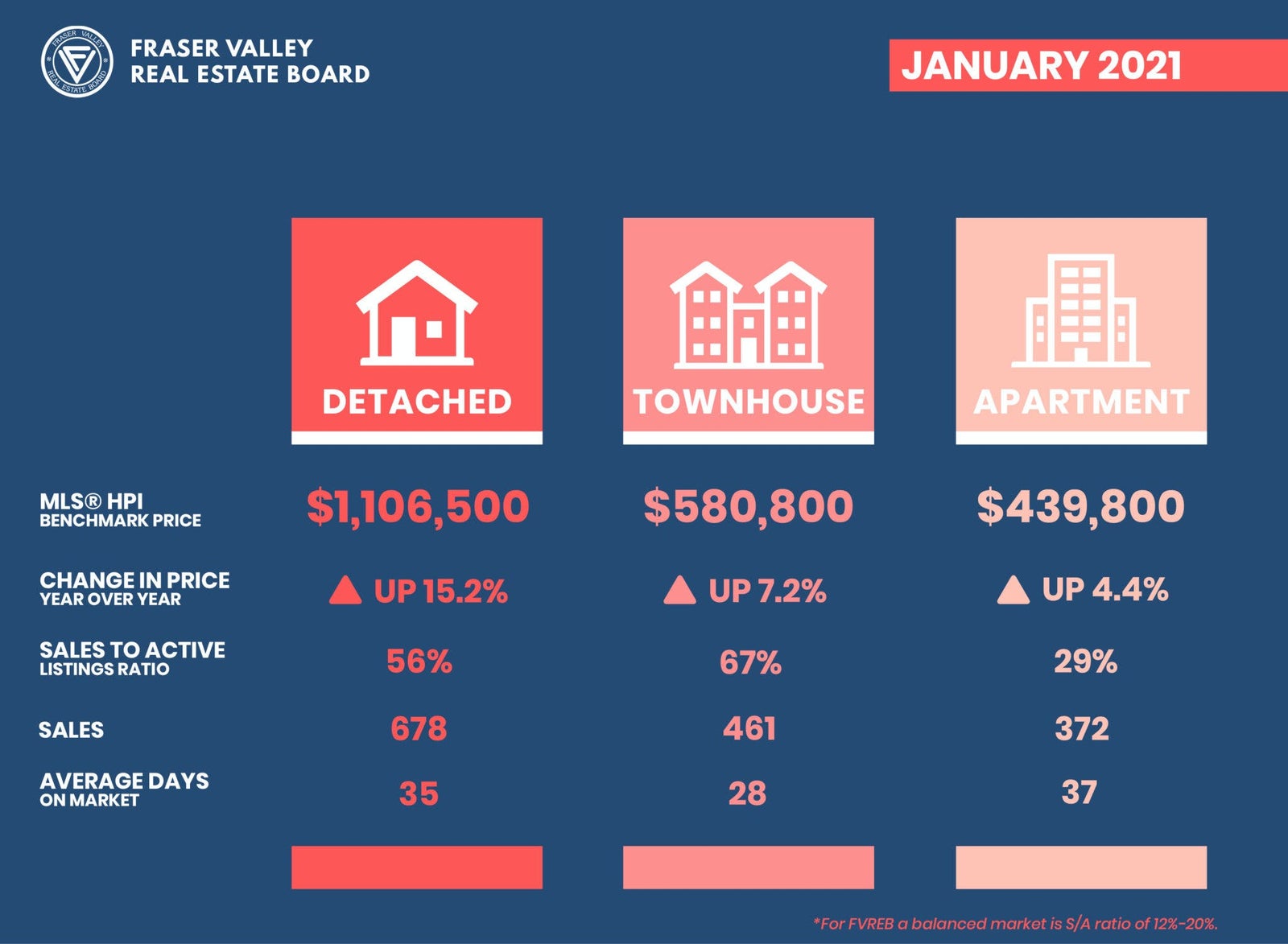